Maybe you already met Bee when signing up for this newsletter?

We certainly fell in love with him – how could we not with Bee wearing that cap!. It is our pleasure to introduce Bee and his mistress, Sandra Stiel.

”The story begins on the river Elbe, were almost every weekend we circled around the idyllic island Pagensand in a small motorboat. Bee was 7 month old and had to join us. As soon as the life jacket for Bee landed on the stoop of my front door, all preparations were done and we were ready for our big adventure. Heading slowly through the canals of the river, Bee was all of a sudden shock-frozen as soon as he discovered that the cockleshell he found himself in was actually moving on the water. Once speed and seamotion increased, Bee preferred to hide in the safety of the bow, close to our feet . However, as soon as the engine was switched off and the motion decreases, Bee was right as rain.

From pottering to sailing

Though Sandra did not plan to take up sailing as a hobby, she gave it a try 2 years later – in a real sailboat - and fell in love in a split second. “The feeling of harmony with nature, communicating with the wind was overwhelming, forcing me to throw all my prejudices immediately overboard.
Not surprisingly Bee loved it too, the space for him to move around was much bigger and the boat was much  gentler in its sea movements. Only at the beginning  Bee was wary of the cap rail, preferring a safety distance to the dangerous edge!  Nowadays though, brave Bee has overcome his demons and getting close to the rail is no challenge any longer.” 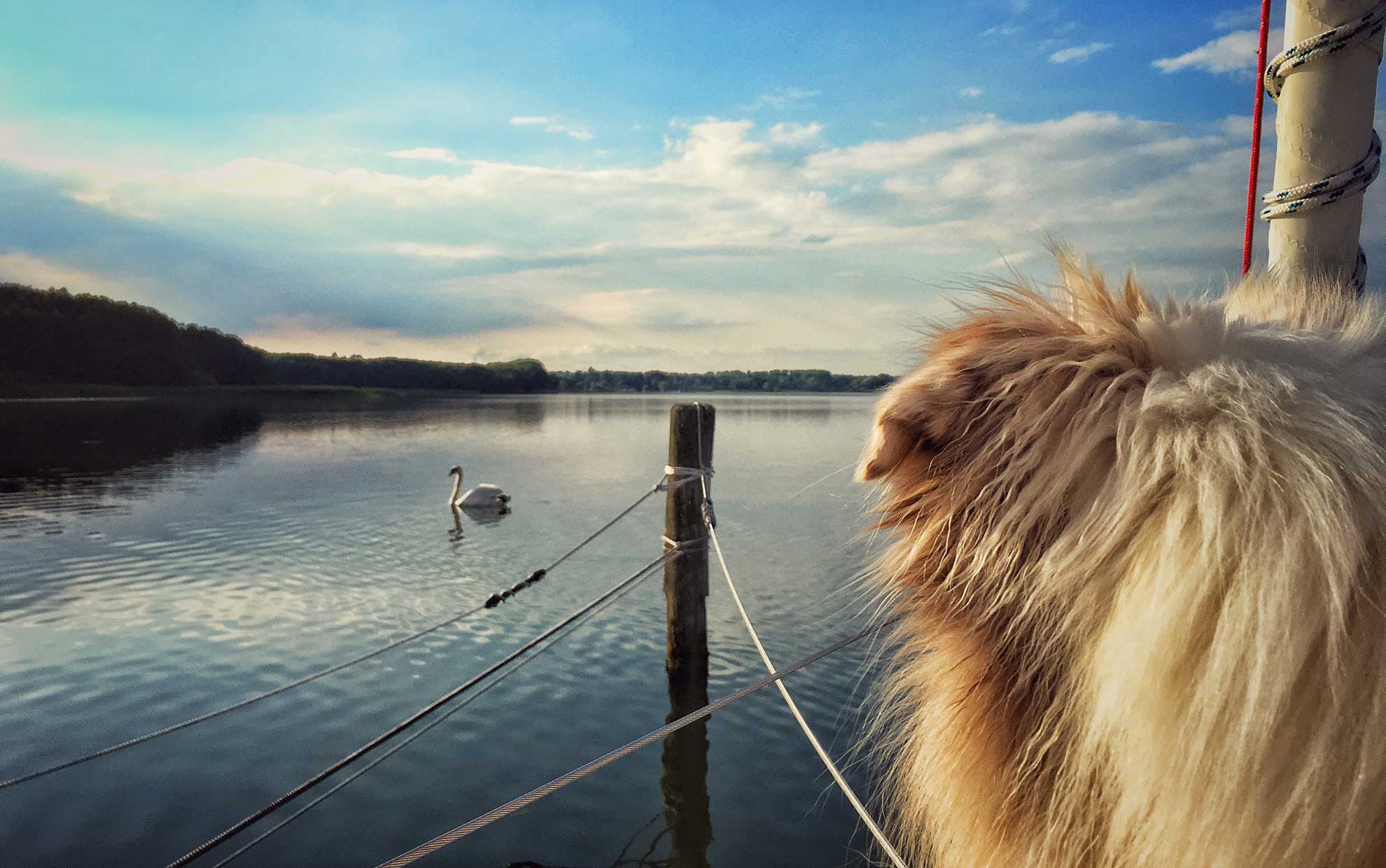 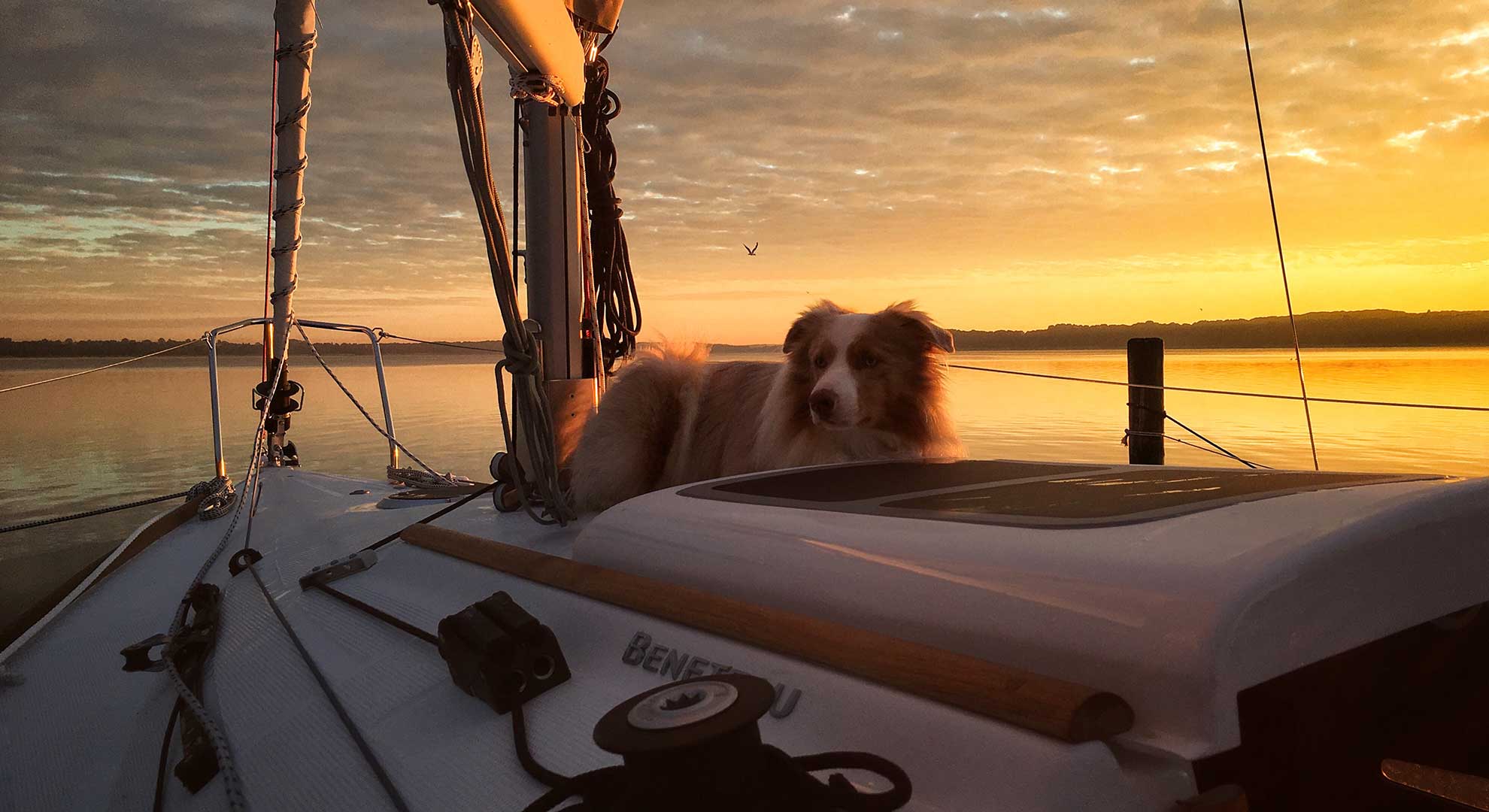 How did Sandra prepare Bee to go sailing?

“Looking back the best preparation for a dog about to go to sea is a combination of trust and obedience. The basic commands of wait, sit, down, stay, heel and come are the foundation and need to be understood and followed from a distance, no matter in which conditions. I have noticed that not only my word and voice are guiding Bee, but also my body language and emotions.

If I had to do it all over again, I can only recommend  starting practicing the basic commands ashore until the dog has internalized them so that it is certain that he  will also follow them when given from a distance. I would use body language or hand-signals combined with a calm, but clear voice until it works every time without fail.  My next  advice is to practice trust and balance. I can recommend using a skateboard, demonstrating to the dog that there is absolute confidence. Of course I know that not everything I do is a natural choice for the dog, but he needs to learn that he can trust me and not just obey for obeying sakes while being uncomfortable all the while. After all, I want Bee to enjoy the times on the water as much as I do.
One thing I would never do is toencourage my dog to jump from the boat into the water. I do not want him to think that it is safe to jump over the side, leaving the boat – it is all about four paws on deck at any time when out sailing! You just never know otherwise if the dog remembers that jumping is safe and a good escape route … and we all know that it will likely happen at the worst moment.”

Bee and Sandra are currently busy planning their next great adventure - sailing in the archipelago around Stockholm next summer. “The images I have been able to find on the world wide web show beautiful landscapes and nature, something that truly fascinates me. Trailing the boat up to that particular area of Sweden will hopefully only take 10 hours, which leaves me enough time trying to figure how to make any land excursions challenging and interesting for both of us!”

If you have a few tips on sailing with your dog, feel free to post your tip and a photo of your best friend at our facebook page.