'Where will these Elvstrøm Sails take me next?' 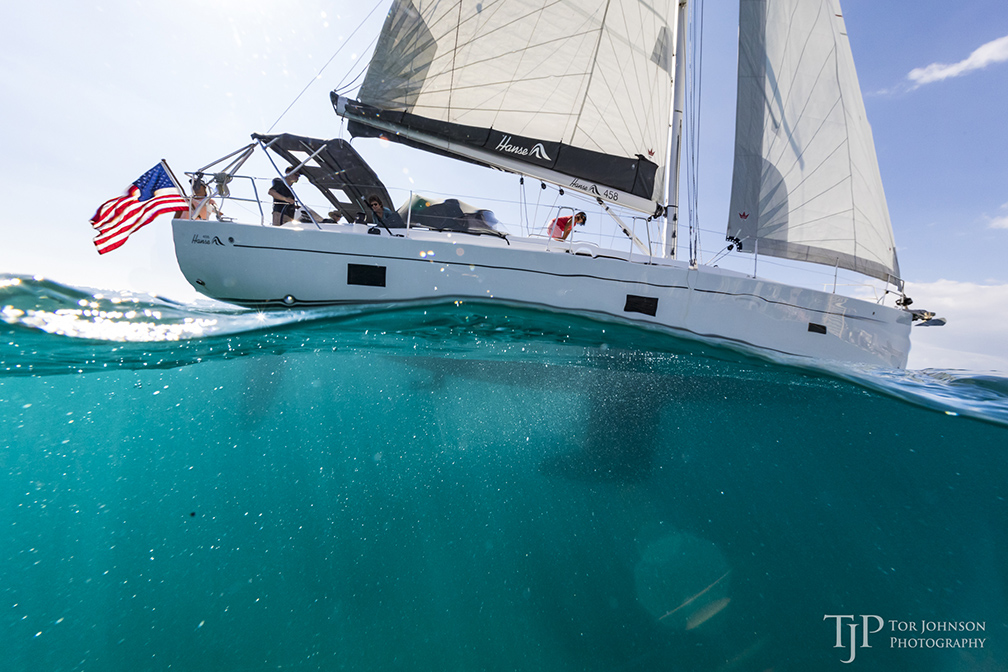 Hawaii-based Tor Johnson is a long-time cruising enthusiast who turned photographer and writer for several big publications about sailing.

Tor and his crew had the pleasure of making the crossing between San Diego, California, and Hawaii for a customer on a 2020 model Hanse 458 and gave us the chance to tell the story – not only about the crossing over to Hawaii, but also his personal story, where Elvstrøm Sails over and over play a vital part.

This crossing was one of them – and Tor contacted us with his story and amazing pictures. We are pleased to share this interview with you - it is all about sailing, cruising and most importantly a great adventure. 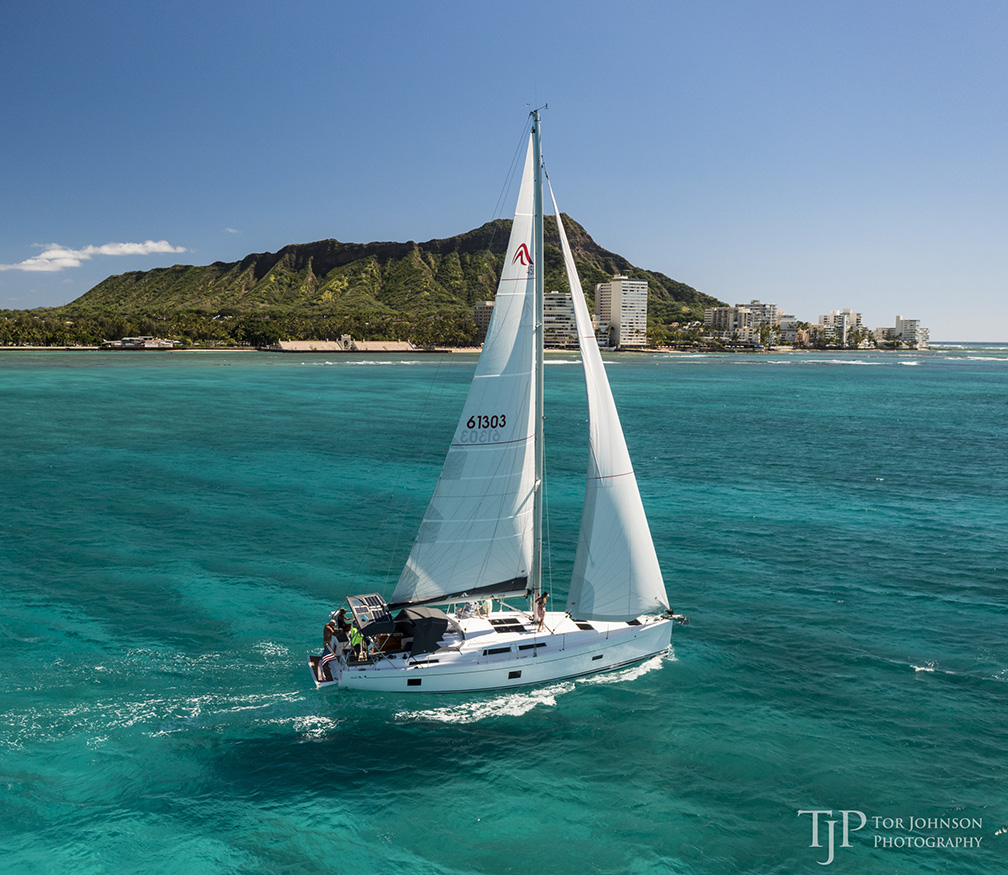 A delivery run became a great opportunity for Tor and his crew to go on a blue water adventure across to their home waters in Hawaii.

ES: How did the job of sailing the boat home for the new owner come about?

TJ: - I work with the sailing magazines and builders, writing about and photographing experiences unique to the cruising lifestyle. My wife Kyoko and I are based in Hawaii, where we spend as much time surfing and diving as possible when not sailing our boat or delivering boats for others.  I also run a stock photography website with authentic cruising images from my voyages and more.

- One such delivery was this recent crossing from California to Hawaii. Considered idyllic as a downwind sleigh ride on the trade winds, which gradually strengthen as the weather warms throughout the voyage, this is a crossing never to be missed. So, when a friend and client recently asked me to deliver his immaculate, newly purchased 2020 Hanse 458 from San Diego across to Hawaii, there was only one answer: “Sure, when can I leave?!“ 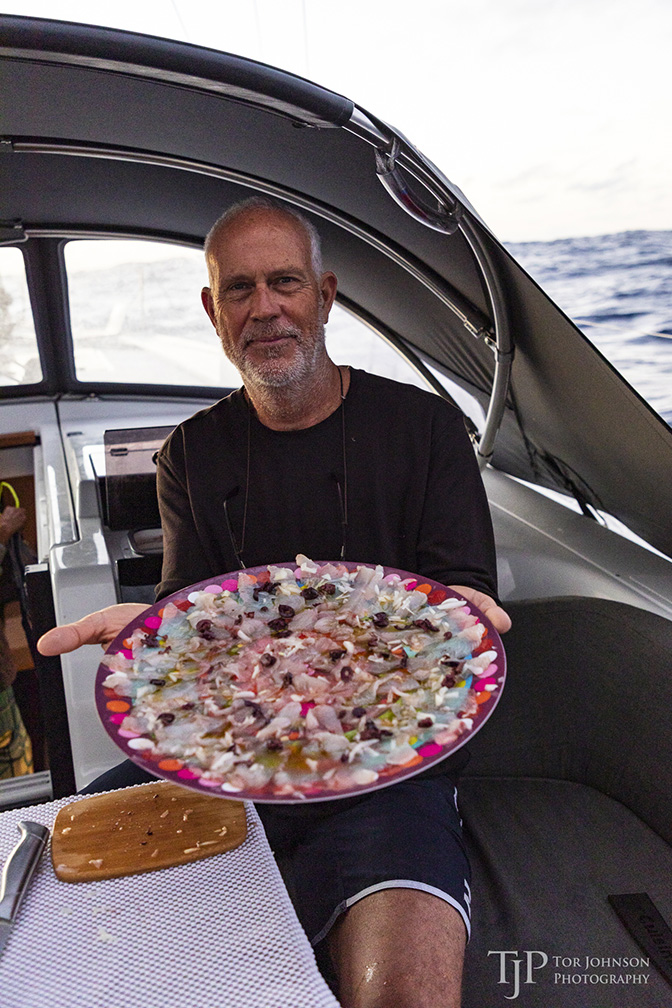 Crossing and documenting the great oceans has become more than a lifestyle for Tor Johnson - it has become a job. The next projects are already marked in the calendar.

ES: What was the Hanse 458 like for this crossing?

TJ: - The Hanse 458 is a sporty crossover between a cruiser and a racer. It was equipped with a beautiful suit of Elvstrøm laminate sails on a tall rig, including a big Elvstrøm masthead asymmetric spinnaker in a sock. Even in the light airs off San Diego, we found that this large fully battened main and masthead spinnaker gave her a nice turn of speed. She was a pleasure to sail, quite light on the helm and responsive for a luxurious cruising boat, and a pleasure to sail.

- This being November, the North Pacific storms pushed mountainous swells our way, which were impressive to watch as they rolled majestically by. Thankfully these powerful swells were well ordered this far south, no longer steep enough to cause us any serious issues. We sailed angles to the wind rather than try to head dead down wind, sailing more miles, but faster, with less wear on the gear and chafe from sails slatting in the big seas. 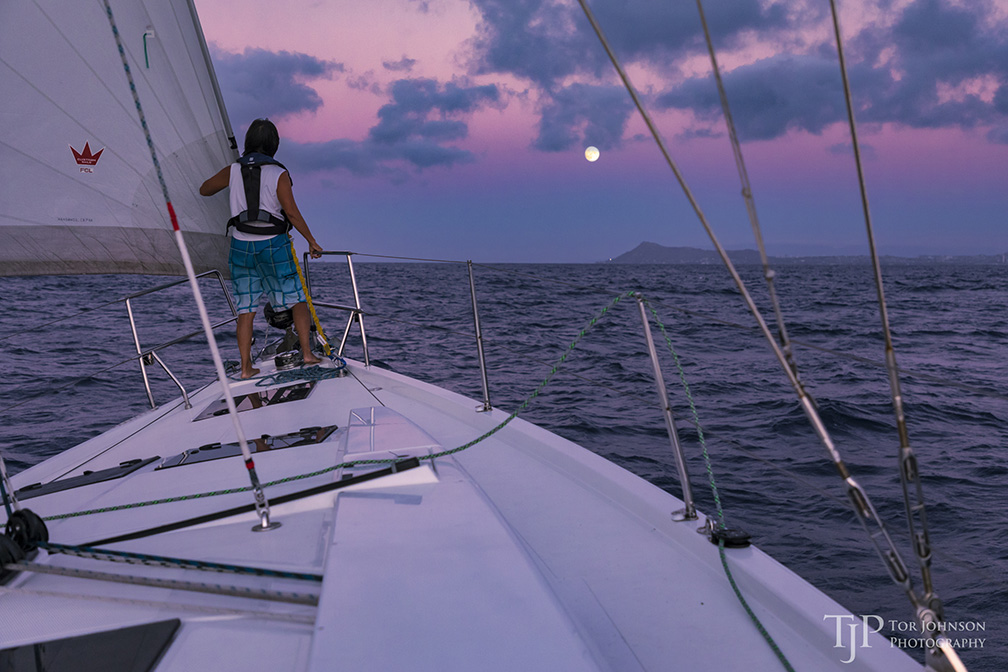 ES: This is another part of sailing someone else’s yacht at this sort of distance. How did you manage to keep the boat in top condition?

TJ: - I sailed conservatively, dropping the spinnaker before squalls which might cause unpredictable wind changes, and before nightfall. The key was to get crew and boat to Hawaii in a safe way – hence we didn’t have a time limit against us. We were a crew of four in total, so we tried to take it easy. I must say that the spinnaker was quite a handful, though. We quickly learned that 18 knots of true wind meant we would need to drop that spinnaker. This being a delivery after all, the point was to get the boat and sails there in one piece. 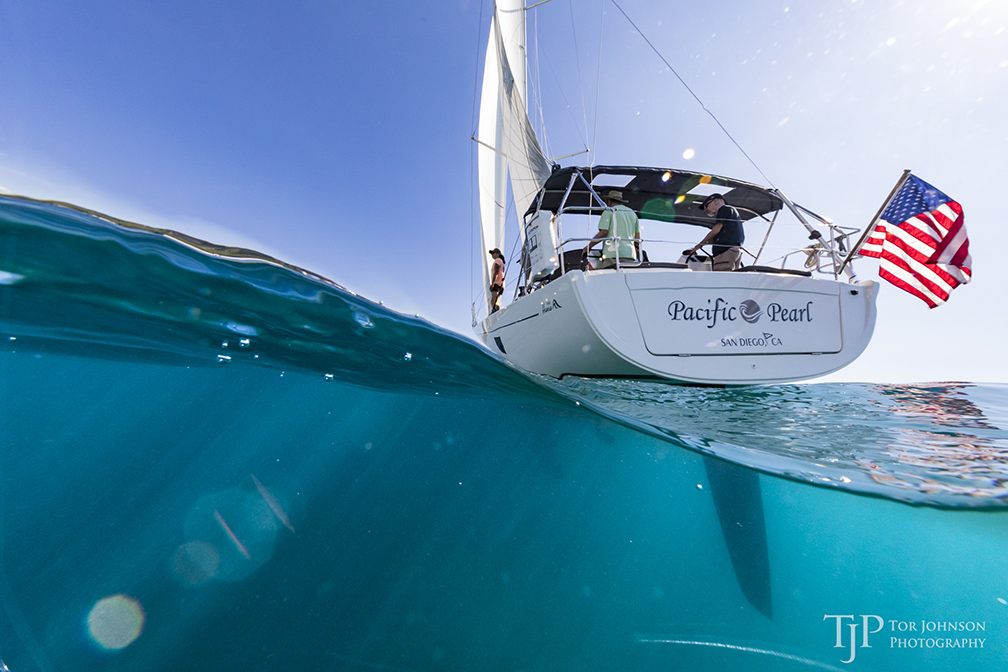 ES: How did you pick up sailing?

TJ: - I think sailing is in my blood. My name, Torsten, is a nod to an ancestor from Sweden, a sailor who jumped ship and started one of the first farms on the Oregon coast amid the native Americans. Rumor has it that he was a rough character, like many sailors in those days, and he had a tattoo of a full rigged sailing ship… sailing down the crack of his ass. Sailors…

- My father grew up in Oregon. Actually, one of his earliest memories is going out through the surf with his dad, which he loved. But what he remembers most about it is the gale of tongue lashing his mother unleashed on his father for taking her 4-year-old child through that notorious deadly, cold Oregon surf.

True to form, my father took our young family of five to sea: Hong Kong, the Philippines, Vanuatu, Japan, Alaska, Panama. Several of the boats we owned were from Hallberg-Rassy. Eventually we made it back to our roots, taking delivery of a Hallberg-Rassy at their yard in Ellös, Sweden. We explored Scandinavia, and the Mediterranean, sailing her across the Atlantic a number of times, then on to French Polynesia and Hawaii. She was equipped with Elvstrøm sails, which powered us reliably on many ocean crossings.

ES: But sailing doesn’t lead to photography and journalism per say - how did this become your second passion and indeed a line of work?

TJ: - One of our crew was a photographer, who gave me an old camera, and I set about documenting the voyages. I’d always been intrigued by the places we went and the experiences that were unique to us as sailors. At the time cruisers were still rare, and many ports we visited had never seen a cruising sailboat. The old camera then made way for a new one, and the rest is more or less history – today, I work for the major magazines, and the delivery of this Hanse became one such story. 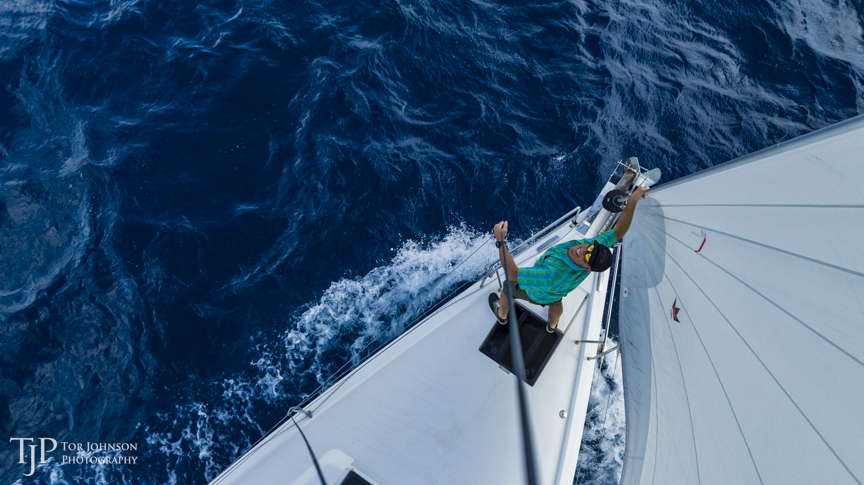 ES: Braving the weather is an important aspect of a crossing like the one you did with the Hanse 458. Another is the adventure – what was the biggest experience on the crossing for the four of you?

TJ: - One sunny day about a thousand miles into mid ocean, reaching away at a comfortable 7 knots over a fathomless deep purple-blue sea, I stood on the fold-down transom, soaping up for a daily seawater bath. I happened to look back over our wake just in time to see an indigo and gold flash of a large mahi-mahi fish literally airborne, flying through the air completely across our wake. The fish landed right on our rubber squid lure and attacked it. It was attached 300 pound-test hand-line and a sturdy rubber bungie. I watched the rubber stretch to its limit before yelling “FISH ON!!” and grabbing the line. We landed the fish on the roomy fold-down transom, and a week of fresh provisions were ours.

- Perhaps our most beautiful day of sailing was the day we arrived, after 16 days and 2,700 miles at sea. A weak front had pushed through as we neared the islands, bringing dark squalls but thankfully no huge wind shifts. We sighted land in the form of the looming peaks of Maui’s famous 10,000 foot tall Haleakalā (House of the Sun) glimpsed high in the sky between rain squalls. As we entered the channel between the islands that night, the weather cleared. A gentle trade wind sent us along the shining silver path of a full moon, guiding us in toward Oahu. We approached Waikiki just as the moon set over the fabled Diamond Head, and the sun rose behind us. 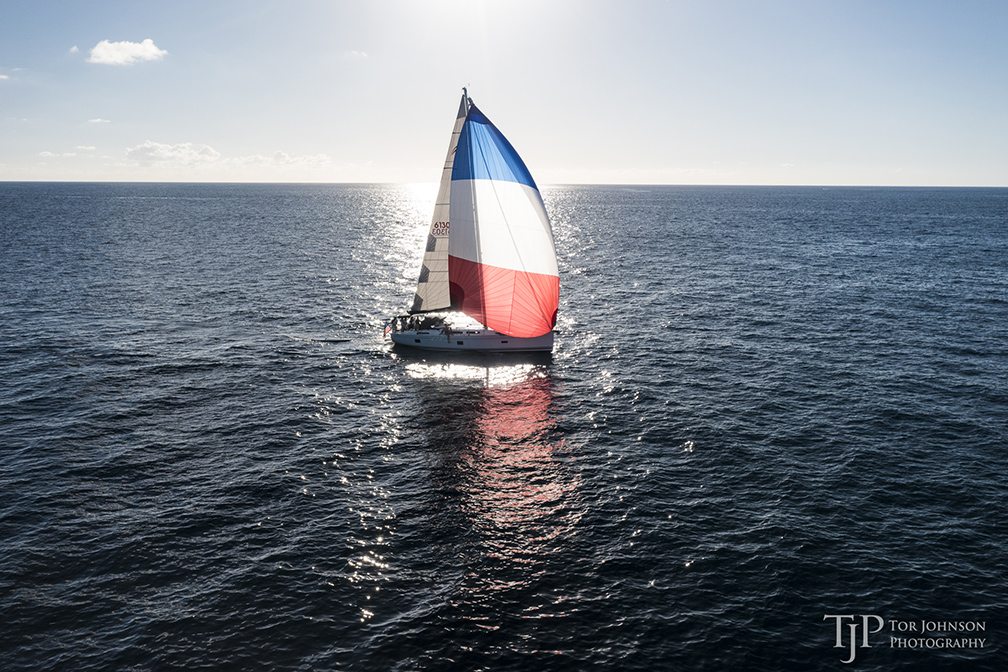 ES: Awesome adventures indeed! Over 2,700 miles takes a lot of planning, so what are you up to next time?

TJ: - It wasn’t long before I began to wonder: ‘where will these Elvstrøm Sails take me next…’.

I am working on the next big project, and it involves my new boat. I sailed my newly acquired Jeanneau 509 across from Europe, and now I plan to install a set of these sails from Elvstrøm Sails on it and continue the voyage in the Pacific Northwest. So keep a good look out for some tall tales in the magazines and online! 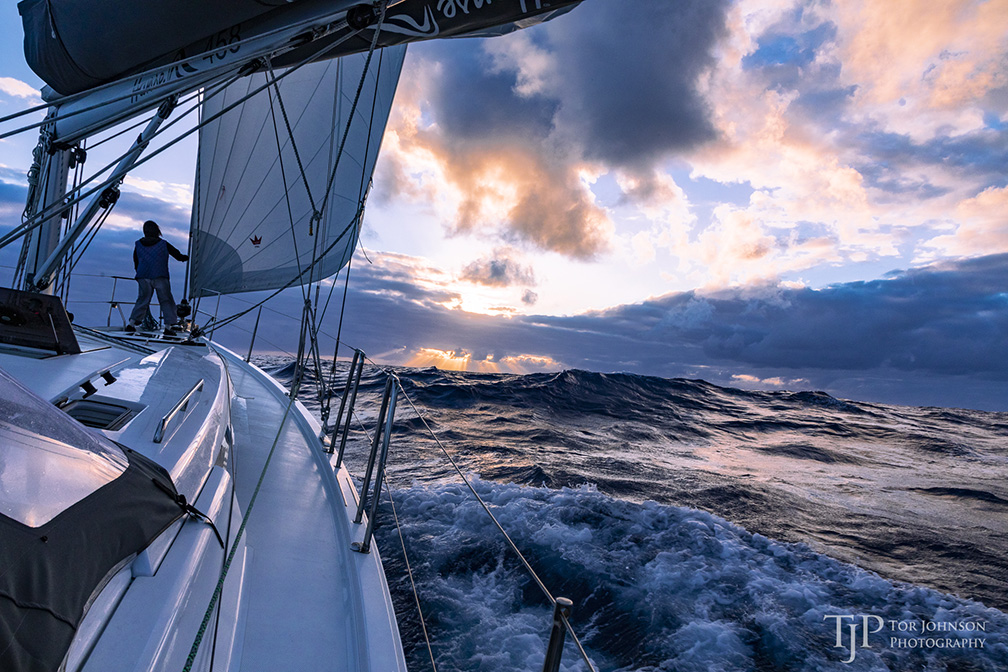 You can see more from Tor and his adventures here: 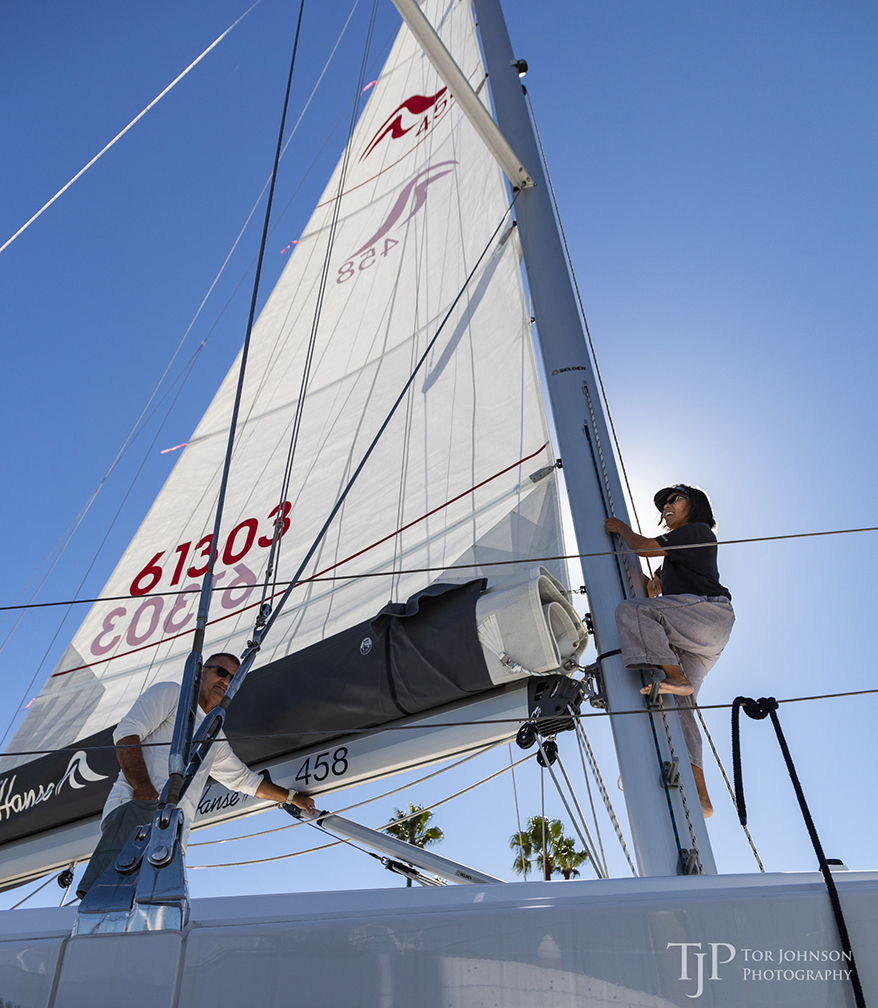